Posts from the ‘Games’ Category 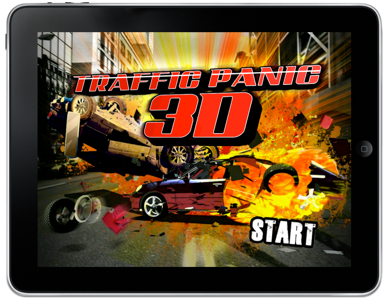 Now, had lots of visceral fun on this one – caught up in an endless car-crash, during a three month stint with the gaming company, Neonplay.

‘Traffic Panic 3D’, an action puzzler smash-em up, was released as a follow-up to the popular maiden title – a more two-dimensional affair, but a palpable hit in its own right. The game was designed for iPhone, iPad and Android release.

The game involved gaining points for spectacular crashes, or else trying to wheel-spin out of trouble altogether. A simple green/red traffic light tap mechanism aided the instantly addictive nature of the game.

Being a ‘freemium’ game, there’s the added option to purchase further vehicles or juicily combustible buildings and items like a Fireworks showroom and wrecking ball. 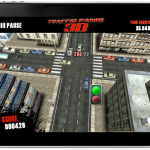 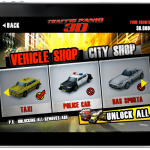 I’d challenge anyone not to get drawn into the simple thrill of this Appstore hit – effectively the mobile equivalent of smashing cars together on the kitchen floor. Unsurprisingly my 4 year old son is very taken with playing both versions.

I worked as producer on the delivery of the game to ensure the chaos could ensue in an orderly fashion through to final launch.

Since release ‘Traffic Panic 3D’ has clocked up some 9 million downloads and has become one of Neonplay’s biggest franchise hits, spawning ‘Traffic Panic London’ and the related smash-up ‘Carpark Carnage’.